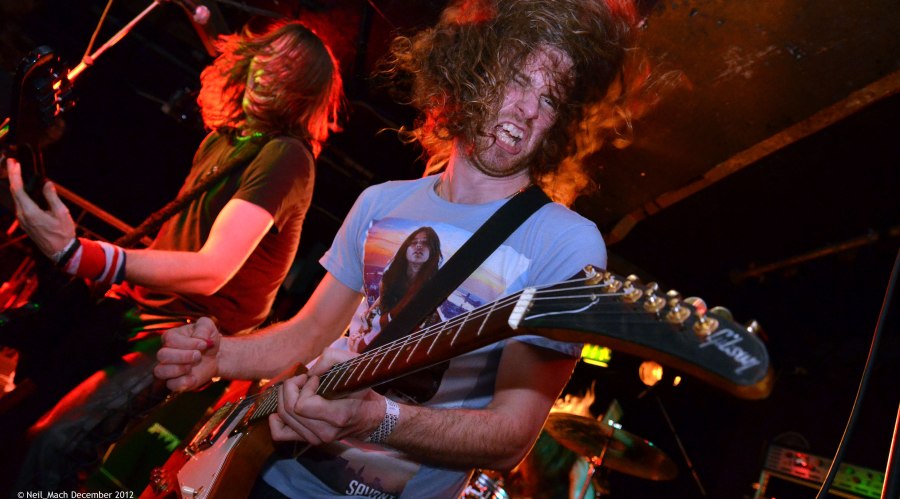 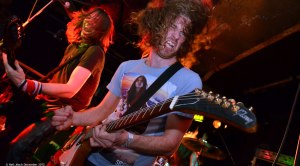 When 4WD jackknifed into our lives back in 2009 we were completely banjaxed by the sheer scale of their sound, and the ferocity of their devastating live attack. Their musical performance is brutal, archaic, brash rock. It was created for the masses out there who still love AC / DC and the Stones.

Last year the band spent some time honing their craft and perfecting their sounds. They played some important dates, and started to collect new fans like a street fighter collects bruises on his knuckles. Then they started working on their new EP  ‘Hammered Again’. The  launch party for the release was at the legendary music venue – the ‘Underworld’  Camden at the weekend.

At the launch show, Jamie Lailey (Bass and Vocals) spoke about their new EP :

“ Hammered is where we should be now. It is a culmination of everything we have become. It’s what we should be playing”

“We have done a lot of growing up. This is what we think we should sound like now.”

The Twickenham boys played the title track “Hammered again” to the fevered Camden crowd. It went down well. It is tight and lean. The hooking riff seemed to tug us by the seams of our raggedy-ass Levi’s, dragging us into the centre of the sweat pit. People were up and dancing like mad things. It was a moment of bewitchment. Those chords are clearly defined and brutal – and they remind you of AC / DC. The pace is relentless and it pushes you to get involved. Then a feverish guitar smears out a lick. You hear the fire, and you go wild. 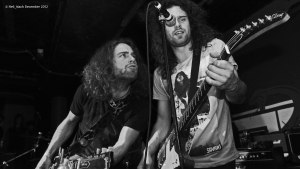 “No Money Down” is a smelting work of intense heat and battering ram power. A livid and totally infectious chorus sounded out across the room. The crowd could not keep their heads still. Jamie’s voice glistened like an engine soaked in sump oil. And it was as smoky as a hickory burner. This was a furious and outrageous piece of heavy rock. Fierce and fast.

At the Underworld gig we also had “ Ride It Like You Stole It” from the ‘House on Fire’ EP. This is a scuzzy, sleazy piece of paradise rock. It may well remind you of Aerosmith at their trashiest. This number sizzled like a slab of steak on the charcoal.

Hot, fatty juices spat out – courtesy of those twin guitars from Ben Austwick and Paddy Achtelik. And those blatantly bruising beats from Will Richards on Drums kept us begging for more.

The ‘House on Fire’ EP also has the infinitely impressive track ‘High Roller’ on it. And a four-wheel-drive party is never complete without the grizzled madness created by this song. Jamie’s voice was gutturally stretched to maniacal highs. And the feverish guitars were played at such a breathtaking pace that we seriously started to think that we were losing our minds. This is the ultimate brain pounder. And a party sensation.

So here’s to Four Wheel Drive. Now let’s see them get the mega-recognition they deserve.