Neverworld – born out of the ashes of two Hertfordshire based UK bands – (Sentinal and Killer Messiah) – are a 5 piece traditional heavy metal band..

In Oct 2010 they released their début EP ‘Welcome to…’

The Grand Inquisitor had the opportunity to have a quiet chat with Ben Colton (Vocals and guitar) from Neverworld about the band’s commitment to the true religion of metal, and about the rumblings of what he describes as a ‘New Wave’ of heavy metal: 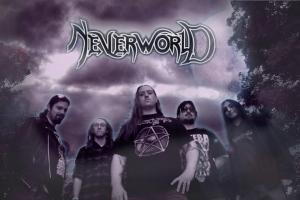 METAL AS RELIGION: How are Neverworld plans going for hitting the summer festivals?

NEVERWORLD: Well, we’d love to say we are playing all of them but – truth be told – we haven’t been booked for any yet! I’m hoping that will change soon – and then we can make some announcements.

METAL AS RELIGION: How did you get on with your ‘Road to Bloodstock’ show at London’s Nambucca ?

NEVERWORLD: The show itself was great. We played a good set and everybody seemed to enjoy it but I’m afraid we didn’t get the vote or the wild-card either. I honestly don’t know why…

METAL AS RELIGION: So tell us about what you describe as the NEW WAVE OF TRUE HEAVY METAL. (NWOTHM)

NEVERWORLD:  I absolutely think we are in the middle of a new wave scene [right now]. To me the NWOTHM is about taking the old school influences of Iron Maiden, Judas Priest and Manowar, for example, and bringing them into the 21st century.

The pounding rhythms, the solos, the operatic vocals and theatrical approach is what heavy metal has always been about… but I think it lost it’s way for a while. Don’t get me wrong there has always been those type of bands flying the flag – but I think there is a real resurgence of young blood out there – right now – who are producing fantastic music.

Obviously, recording technology has come on leaps and bounds too so there’s some great sounding records out there. I think a lot of the lesser known bands of the 80’s NWOBHM scene suffered with horrible production, which is a massive shame – as some of the songs were amazing.

METAL AS RELIGION: So how is your ‘Welcome To Neverworld’ EP doing for you?

NEVERWORLD: Our début EP came out in October 2010 and the reaction to it was so much better than we ever could have hoped. We’ve been very lucky and had some amazing reviews. So far I haven’t read anything bad about it (touch wood!) which fills me with pride and [it] has given me tremendous faith. Our fans have been awesome too. They are quite a vocal bunch and to see people sharing your music all over the internet is simply brilliant. You can’t buy that reaction.

If the heavy metal fans are listening and sharing your stuff you know you’re on to something. That gives me a real buzz and I have to give the ‘Neverworld Army’ a big shout out for that!

METAL AS RELIGION: So we heard that you have been played on American radio… how did that go?

NEVERWORLD: Well, from what I’ve been told we were number 8 in the charts for a while and that was down to people requesting the song! We get quite a lot of airplay these days which is great. It’s never a bad thing when people are playing your songs across the airwaves! I think it’s quite difficult to gauge what effect the airplay has but if only one person likes what they hear and check you out because of it then that’s one more fan than you had yesterday! There’s some great net shows out there right now, and they really do help get unsigned music out there. That can only be a good thing

METAL AS RELIGION: Where do you find your most loyal fans?

NEVERWORLD: We have been very lucky with fans and I’m pleased to say they are all over the world. There’s not just one place. We have great fans in Canada, Greece, Australia, USA etc. who will buy whatever merchandise we have and they also help us to spread the word.

Heavy metal fans are the best … They want the CD’s, the T-shirts, the posters etc. That’s what being a fan is all about and we certainly love ours!

How will we broaden our fan-base? Well, we’ll be doing all the usual things. Continuing to play great live shows to new audiences all over the country, keep getting our songs played by awesome radio shows and shamelessly doing anything we can to raise our profile!

METAL AS RELIGION: Tell us about your collaboration with Christina Gajny (Inner Eden, Ode of Eternity) on your ‘Blood and Romance’’ track.

NEVERWORLD: I actually just woke up one day and I thought to myself wouldn’t it be good to have a male/female duet. I’m quite impulsive so I went on Myspace to look for UK based female singers and Christina was the first one that I came across!

We all met up and got on great so I knew [that] it would be cool. The subject was easy really. It kind of had to be a love song but we put the dark vampire twist on it. Believe it or not it had nothing to do with the Twilight movies! I haven’t even seen them. The influence for the song was more Bram Stoker’s Dracula. We wanted to go to town with the song and make it as theatrical as possible. Almost an opera type thing. It took a few weeks to come up with the whole track and we spent hours in the studio getting it how we wanted.

The lyrics were the hardest part [Laughs]. Fortunately Christina wrote her parts as I was really struggling with that. I did my vocals first and then we finally got her in to do her parts. She absolutely blew us away. Not only has she got a staggeringly beautiful voice but she really knows how to use it too. We didn’t have to ask her to do anything. She came up with all these haunting melodies herself and really made the song a triumph. We are very proud of it. We will be re-recording it for the album too so she will be back in the studio with us again soon. Whenever we need female vocals Christina will be the one doing them for sure. She’s basically our 6th member!

METAL AS RELIGION: Tell us about making your ‘They Live (We Sleep)’ video…

NEVERWORLD: Yeah the video was a lot of fun to do. We really wanted to do a video for [the track] ‘They Live’ and we were talking about it for ages.

Then I got introduced to a very talented young lady called Erin Pearson. She is a film student and was looking for a project … so we asked her if she’d be able to make us a video. She agreed and we set about making a comedic tribute to the John Carpenter film about a world under the subliminal influence of aliens!

Making the video was an absolute blast, but it also gave us an insight into just how much work goes into stuff like this! It was a real eye opener! It’s a 5 minute video and it took us a month and a half to make it – but it was so worth it. The reaction to it has been brilliant. People really got it. I was worried people would take it seriously but everyone has so far embraced the humour and enjoyed it for what it is.

The movie is one of my favourites and it was a dream come to true to honour it in song and video. We have since made another video with Erin’s company Snare Productions  and that will hopefully be released when we get our album out! It’s a gore fest!

METAL AS RELIGION: So what else is in the pipeline for Neverworld? What are your BIG PLANS for 2013 and beyond?

NEVERWORLD: Well, right now we are currently just over half way into recording our début album ‘Visions Of Another World’. We are aiming for a July release but that isn’t confirmed yet. We’ll keep everyone updated on this anyway. There will be an album launch or two, and then we’ll be hitting lot’s of venues up and down the country to promote it.

We are really looking forward to getting it out there. It’s been a long time coming and we know that people have been waiting very patiently for it! I can assure everyone that the wait will be worthwhile. We have really gone to town on this and we want to give our fans something special.