The Somatic Defilement, originally released in 2007, is a concept album about Jack the Ripper’s infamous murders of prostitutes in East London’s Whitechapel district. This 2013 re-release sees the band tasking producer Mark Lewis to painstakingly bring the six year old recording to today’s standard.

Whitechapel – the self titled album released June 19, 2012 was one of the most well received albums of 2012, with critical acclaim from some of the most respected music outlets including The New York Times, Alternative Press and Metal Hammer. The album also claimed bragging rights as the iTunes UK Metal Album of the Year for 2012! 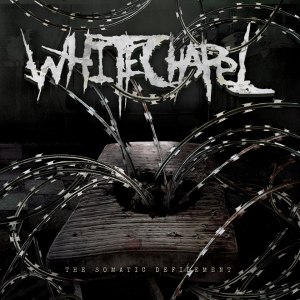 WHITECHAPEL’s video for their song “I, Dementia” is now available for viewing. (Shot by David Brodsky of MyGoodEye as part of the Scion AV Project.)

Our high priest had a listen, and here’s what he thought:

In the face of a giant saw-mill spin-tool, a snarling, furious roar of sounds creates the initial depth of feeling. The click-riff deep drilling continues until it exposes the membrane of springy surfaces below. Then we can see, with horror,  the glare of flayed skin flapping. This is bass-heavy and dangerous. It devours ravenously, before snarling and turning to attack itself. The end-piece of this song is really elemental, a slice of the wonder-stuff. Toned, invigorating and thematically intact.