Seven Webster (7pm Management) is the mercurial manager who has launched a thousand rock careers around the globe. Renowned musicians including Dido, StoneBridge and ‘best live band in the world’ – Skindred are indebted to his managerial skills.

Seven is also the festival booker for Hard Rock Hell, Hammerfest and the other festivals within the HRH brand; And, as a columnist, he oversees the Live music content for the U.S .music industry publication One Movement FM.

He has now conceived of the “Global Rock Summit” the first of which is to be held in Los Angeles, on April 4th-5th 2014 at the Hollywood Roosevelt Hotel. The GRS will feature a cross section of expert panellists spanning a rich sector of the global rock industry.

The event will discuss the future of the industry and look at solutions to further bolster and expand business opportunities across the sector. Conference speakers already include the Download promoter Andy Copping and Soundwave Promoter and Founder AJ Maddah. 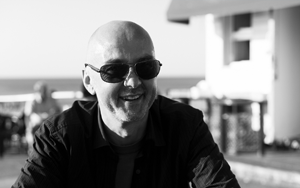 I chatted to Seven about his time spent in the music inustry and about putting together the “Global Rock Summit”:

HOW DID YOU FIRST START OUT IN MUSIC?

Actually, Marc Bolan bought me an Easter egg. I had better explain…

When I was about nine years old I purchased a copy of Electric Warrior (by T Rex) and I was immediately their biggest fan. Later I got weaned onto Hendrix and the Who and all that stuff. But my first love was Bolan. Then my elder sister started dating David Bowie’s first guitarist – a guy named Mick Wayne – (pre-Ronson) and Mick Wayne was also good friends with Gloria Jones (Bolan’s girlfriend). So, through this [convoluted networking] my name was passed around. And Marc Bolan sent me an Easter Egg! That’s my Marc Bolan story. The egg had a message in it – inviting me to call Marc. But I never had the courage to do that!

Then I started playing (guitar) and writing some stuff. I wasn’t the world’s best. I liked simple strong structures. But I was signed by Lucian Grainge (now Chief Executive Officer of Universal Music Group) as a song-writer and I picked up lots of stuff through that relationship. I could see where Lucian was going – and I watched how other careers moved too – but [my time with my first band] is now like a blurry vision […] and I soon started to realise that I needed to try to find things that were better for me – and to take things a little bit further.

So I started auditioning singers for something new – and I auditioned about 133 singers – I had so many nutters turning up at my place at the time – then someone turned up who was a fantastic lyricist. And we wrote songs together. And we played our first gig (as a rehearsal) at the Mean Fiddler – before the core band went on. It was an awful thing! Almost every record label was in the building – and I really thought that it was the end of my musical career – but the opposite happened – the next morning we were swamped with offers.

We Signed to Chrysalis Records. After that I spent three years of my life trying to put a record out. They [Chrysalis] seem to have forgotten what they had signed… one lot of staff got sacked … and another lot of staff came in. Ninety per cent of my time was dealing with the politics of the music industry. And I started to learn management.

IT’S KINDA LIKE CHESS I SUPPOSE? THE STRATEGIZING BECOMES ADDICTIVE?

Yes. And I soon I realized something. When people told me things (because I was young and with a band) I thought: “Hold on a second – I know better than that.” I learnt the word ‘Bollocks’ and I started manoeuvring things to suit me. I also learnt other stuff – like marketing – and I hit a stage in my life when I finally decided it was time to take a different view of things. And I decided that, actually, I would like to work on the ‘other side’ of the business and to think seriously about finding someone to manage. I was always helping other friends in bands – getting people TV slots and things like that – so I decided it was time to work for myself.

WHAT IS YOUR FOCUS NOW?

I have the privilege of working across the spectrum of music. I started the Hard Rock Hell festivals (seven or eight years ago) with Jonni Davis and I was given just a week to find talent [for the first HRH festival – in Somerset]. It was like ‘you’ve got one week – or it isn’t going to happen.’

I found Twisted Sister (so we went on sale with that) and I found Tesla too. I was working with a female rock act called McQueen at the time, and [through some inventive networking] I found out that Tesla were in the country and we made what I call a ‘lateral’ booking over some fish ‘n’ chips.

DO YOU THINK THE FEEL OF THE FESTIVAL HAS CHANGED SINCE THEN?

No, I think we have honed what we do. When we first started there was no confidence in it (from a punters point of view or a band point of view) but now it’s the opposite. The VIP tickets are sold in minutes. The big summer festivals have been taking a battering over the last few years. And now Hard Rock Hell is quite an important event on the calendar. All the agents are getting in touch …

Some great little festivals (like Guilfest) went under because of the weather. Summer festivals are a ‘big boys game’ now. Live Nation had to put one million pound’s worth of wood-chip down at Hyde Park for the Soundgarden/Bruce Springtseen day – they then spent another two million on taking it up! That’s three million spent on a weekend’s event. Just on wood-chip. Not many have pockets that deep. Hard Rock Hell is marketed as a holiday (rather than a gig ticket) and that’s the beauty of it. You are not just seeing one act. Normally, when I buy a ticket – there should be three reasons for me to want to go. I want to see three exciting things on a bill.

We have always tried to find a booking pattern and a shape for the event. Next year it comes forwards (date-wise) slightly – nearer Halloween – so we can book one year ahead – and we can get to grab some bands who are into their touring cycle. The agents are working with me on that. I worked a lot as a manager before, you don’t see how an agent goes out and how they work when you’re a manager – but now I have information from both sides – and that helps when I speak to managers and agents.

WHAT’S THE NEXT BIG THING?

Outside this [the HRH festivals] I manage Skindred. I had a nice roster of artists – but more-and-more I have had to think outside the box … if you want to make an income out of music… it is really hard to do. So I do a lot of things right now. My roster of artists won’t put food on the table or pay the mortgage any more. So I started to put build a portfolio of other business ideas.

For me, the one thing that was missing in rock music was that there is no centred conference that helps to aid and support rock music. In other areas of music you have multitudes of multi-genre conferences where everyone meets (like Midem) and you might get one or two rock people turning up… but there is never going to be a panel of interest for rock and – to be honest – the focus is so spread that it is never going to really help rock.

Even the Great Escape in Brighton doesn’t have many rock artists. It is unhelpful. It’s not what our industry really needs.

So it makes sense to start something small for rock – something that can grow – and Jordan Berliant ( manager of Slash and Linkin Park ) got on board with me (which was brilliant) and we put our heads (and our contact books) together. And we have come up with a rock conference.

In all fairness – all the U.S. rock managers are already saying ”Yes we want some of that”. And we have AJ Maddah (Australia’s Soundwave Festival Promoter and Founder) flying over – so that has got all the agents interested. I would like to see more acts registering – but we’re getting there. There are tons of bands who want to play the event – but there are not many slots (the conference aspect is what we want to grow.) We want to see about 500-600 people in a room. But with real potency.

Week on week I help bands to find an agent or put people together. I like to think that – in one role or another – I am a champion of music. That’s supporting my industry.

Hopefully, this thing the “Global Rock Summit” – will grow. We will hope to keep building it – keep adding to it – we hope business will be stimulated by it. No-ones getting paid – it’s gonna be like that – but nicely done. Done for the right reasons.

It’s going to be launched in the same room that the Oscar’s were launched [Hollywood’s Roosevelt Hotel] on April 4th and 5th. The event starts off at Hard Rock Café – then we have a hard day of it. It’s going to be an intense day. Heavily programmed. All about where rock music is being monetised. It’s going to be about getting some really good opinions flowing. And engagement starting.