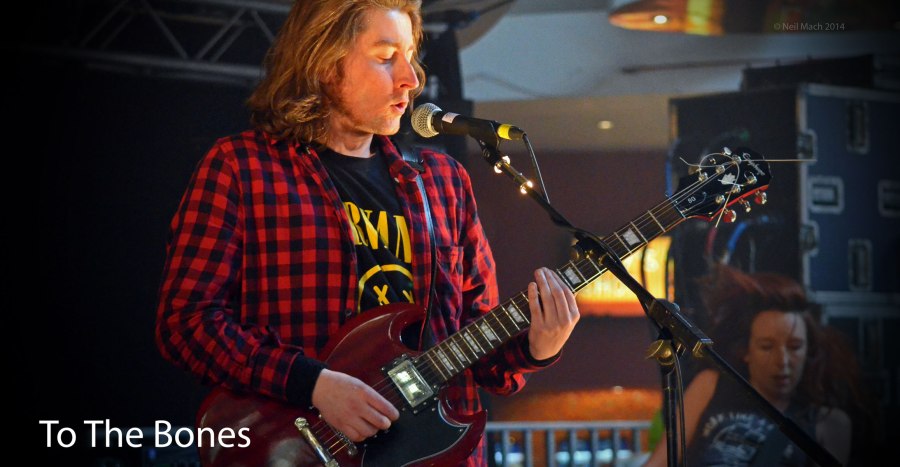 HOW WAS YOUR HAMMERFEST SHOW – WHAT WAS IT LIKE FROM YOUR PERSPECTIVE? 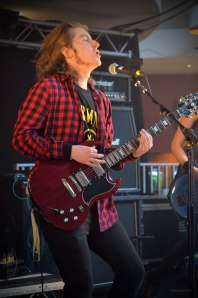 Great, It was amazing to play that big room. We loved it. We were on early … but it was really busy and everyone seemed to look like they were into it. It were cracking.

But Rhys smashed his guitar though. So, he’ll need to get a new guitar.

Rhys: Yeah, I kinda got a bit excited right at the end and …. due to some technical difficulties… my guitar is a bit worse for wear.

Basically it’s day had come. It had to be killed. God bless!

SO METAL HAMMER SAID THAT YOU SOUND LIKE PART MOTORHEAD PART QUEENS OF THE STONE AGE… FAIR COMPARISON?

IF YOU WERE TARGETING A PARTICULAR AGE-GROUP OF FANS – WHICH AGE GROUP WOULD YOU BE LOOKING AT?

But whoever digs us – really – it’s cool. It could be anyone of any age. Anyone who vibes off it. Whoever wants to get up front!

And we don’t really write songs for people. Generally.

WHY DO YOU WRITE SONGS THEN?

Because we like to play music … and it just so happens that we write songs that allow us to do stuff like this.

The song-writing process for us starts with coming up with ideas on acoustic guitar at home. Messing about a bit. Then the rough ideas are brought to the rehearsal room. We’ll all jam it together. And see where it goes from there. And there are instances where we all jam together and come up with riffs right on the sport. And that’ll turn into a song. There are different processes. But it’s always fun. Always exciting.

WOULD YOU TEST A SONG ON A LIVE AUDIENCE BEFORE IT’S COMPLETE?

We have done that before. Sometimes we push a new one out there to kinda gauge the feedback. We can see how it goes down live. Whether it’s too long. Too short. We are never afraid to test a new song. We are always pushing new stuff out there.

And our processes – as musicians – are changing and evolving. That’s part of being an artist. That we’re learning from each other. Always trying out new things. We’ve all done this for a few years now – but it’s still exciting. We are now in a position where songs can come from a riff. Or they can grow quite organically. The practice room becomes quite a special – and quite a magical – place.

We are in a really good place right now – where new songs can come – can evolve – really quite quickly. Because of how we’ve been (in the last two years) with each other.

And in the rehearsal room other things can be added to. Added on top.

SO, HOW DO YOU KNOW WHEN A PIECE IS COMPLETED THEN?

Rhys: When it’s completed …. (all laugh) Er. I tend to sit on a tune. For a long. Time. We listen to it. Over-and-over again. I guess that when it gets to the mixing stage – that’s when it’s done. I guess.

It’s fair to add that song-writing continues into the studio as well, doesn’t it. We do a lot of work before we take it to the studio. But there is still work to do.

It’s Brock n Broll in Chorley that we’ve been working with. And we’ve had some great people mixing it too. Dave Eringa (Manic Street Preachers) for one. We have done a lot of work with Dave over the years.

And we did some work at Dean Street Studios on our last EP  – at Tony Visconti’s. There, we got to work with metronomes and toy pianos. Yeah… we have worked with some cool producers. And we will continue to work with the best.

DO YOU THINK THAT YOUR RECORDED OUTPUT CAN BE SEEN AS A DIFFERENT PART OF YOUR ARTWORK – OR DOES THE LIVE SOUND TRANSLATE ACCURATELY ONTO THE RECORDINGS?

It’s a tough one that. When we are actually doing the recording we all jam together. We bounce off each other in that sense. But it’s fair to say that we try to capture (in the recording process) how we think the song should sound. Live. Because “live” …. to us … is what we do the best. It’s a natural thing.

Jude: But obviously there’s loads of stuff that you can do in the studio which you can’t do on the stage – like extra guitar parts – and it can be become quite difficult. It’s hard to say. Yes, that’s the one. That’s the final version. I struggle with that. So I think that they are two very different products. But, for me personally, to finish an album and to be able to say “This is a body of work we have done together ” can be such an amazing thing. So that’s what we are working towards.

AND WHEN WILL THIS ALBUM BE READY?

Well, we are gonna release a series of singles out of the album – as this year goes on – because we are still doing a bit of building work – and we’ve got quite a few tours coming up as well. But we will probably drop the album in 2015. The singles will keep people excited. But we’ve got a bit of building to do yet – we think there’s a way to go until it’s ready. We don’t want to rush it.

BUT YOU DON’T WANT TO THINK THAT TIME IS AGAINST YOU, DO YOU?

No, that’s true. It’s tough to take the call. But we guess that there’s still quite a bit of work to do to get the album just how we want it. And we think that 2015 is being realistic. We think it’s a logical time frame.

Yeah, and it’s an amazing line-up there. And we have been put onto a pretty good part of the bill. The Purple Turtle   at six o’clock. But what’s really cool is that The Virginmarys  are playing just an hour after us (they’re at the Garage). We did some touring with those guys and they are so good. Superb. And they were really lovely, brilliant boys to us. They really welcomed us.

WE ARE LOOKING FORWARD TO THOSE SINGLES – WHAT’S THE FIRST TO BE RELEASED?

It’s gonna be called “Icy Belly”. It’s been recorded and is basically ready to go. There will be a video with that. We are still working on that at the moment. Jude’s got an idea…

Jude: Yeah, I’ve got an idea of me in a hoop. I do an aerial hoop class. It’s like a hoop that hangs from the ceiling and I do a kind of ‘routine’ in the hoop. It’s my idea for the video. But I don’t know if its gonna be allowed. I don’t know if it will get passed. If you see it on you tube then the argument’s been won!

SOUNDS FANTASTIC! AND THANKS FOR A BRILLIANT SHOW TODAY AT HAMMERFEST.

GOOD LUCK WITH ALL YOUR WORK THIS YEAR! WE HOPE TO SEE YOU PERFORMING AGAIN VERY SOON.

THANK YOU, TO THE BONES

TO THE BONES were talking to METAL AS RELIGION