The show that ‘Derision’ played at Hammerfest was a whirlwind of sound and fury. Lead man Tony Smith (vocals) reminds us of ‘Joe Cocker’ – with piercing eyes that gleam like spiked blades from a dense foam of orange bearded growth.

Guitarist Eddie White looks formidable. A devilishly long black beard cracks diagonally down to his chest – he holds his forehead imperiously high – as he wields his sleek ebony ESP Viper.

Kirsten Slater (guitar) seems a bit more benevolent than the rest of the crew. Rivulets of golden hair hide pale eyes. And John Mellor on drums seems more respectable than the others – the bank manager type … but he probably harbours a hidden secret and a dangerous double-life.

‘Derision‘ specialize in their wildly entertaining and relentlessly intense live performances. The energy that they bestow upon their audiences has earned them very positive reactions from all over the heavy metal world. 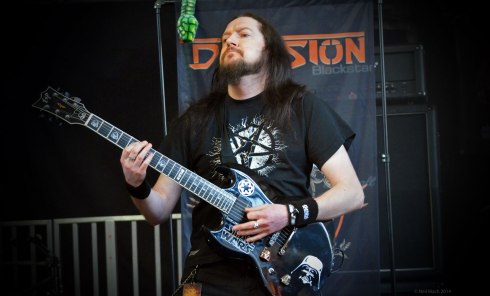 Their current plans involve the release of two EPs – both of which promise to show-off their newly renovated sound and their unmatched energy.

The first EP will focus on the world of Zombies and the impact of an undead uprising that threatens humanity.

The second will pay tribute to the classic horror movie ‘The Thing.’

At Hammerfest I met with the band, and we started chatting about Zombies.

“We actually have a zombie survival plan … ” I look around the group – to check if they are joking. But there’s not even a hint of a smile. It appears that they are deadly serious.

“What? In case the Zombie threat level is “elevated” to “yellow?” [A Yellow Alert means that Zombies pose a significant risk to the public.]

” Yes, then we will barricade the house … and we have installed a JCB phone … it’s not a smart phone … we use a JCB battery because it lasts 21 days. So when there is an apocalypse – we will be fine. The rest of the world will be f **** d because their smart phone battery will only last for one day. ”

The only slight snag with this plan – I point out – is that they will only be able to phone other people that have equipped themselves with similar JCB phones. But – they say – they have even thought this through:

“Yeah, we have installed a JCB phone at Domino’s … that’s the only place we’d probably phone anyway…”

The outstanding video for ‘Predation‘ has three intrepid Zombie killers on the hunt for a member of the undead – who is hiding inside a dilapidated Victorian industrial plant.

One of the hunters – an attractive looking brunette lass – seems to believe that adequate safety gear and authorised PPE for Zombie hunting should include high-heeled boots and a black push-up bra.

“Head shot… head shot.” There is no pause at all as each band member chips in.

“Always aim straight for the head. Kaput the brain! Use a double barrel shotgun for ease. Alternatively, approach with a baseball bat or axe. This way you will save on ammunition. Maybe throw a couple of Derision CD’s at them. To decapitate them. ”

But for Derision it’s not all about Zombies and having a laugh. “We take the music very seriously.” says Tony

“We have a sense of humor … but … when we’re on stage we are serious minded in what we do. We are no different to the people who are watching us. We like to give the audience a good show. That is important to us. This is the serious point .”

I have already told the band that their shows are famous for the undiffused energy.

“Yeah! We love to see the audience enjoying themselves. The displacement. The banging of heads.”

“ We love to see a lot of movement out there.”

Ian McCormack has recently taken over from Seddy on bass guitar. So he is new to the Derision team. I ask him how he’s fitting in.

“In the short couple of weeks that I’ve been in” says Ian “They’ve been supporting me as I began learning the set. I played my first gig with them last week in Bolton. And this show at Hammerfest is a great opportunity. A prestigious gig. They’re a good bunch of lads to hang around with. I’m having a good one.”

The other band members all nod their approval. “Yeah, he’s a great guy.” Says Tony. “We had a couple of guys apply for the position – but Ian stands out – everything we have asked him to do – Ian has been able to produce.”

“But he’s still on probation though…” The other bands members shake their heads in mock resignation.

“The difference between us and Ian” continues Eddie “Is that we can all leave the band … but Ian… well he can’t leave the band. We tell him when he can leave. He’s the only one that can be fired!”

I beg to ask the band about their song-writing work that’s in progress.

“Yes, we are working on our six track EP right now.”

“We’re doing two EPs this year. The first one (with ‘Predation’ on it) is more or less complete . The art work has been done. And we could release a special limited edition thing – just to start things off .”

“Then the second EP (based on ‘The Thing’) will come later. Hopefully we will get another video out for that. We have ideas about it. It’s still all open. The first EP should be released end of May or June and the second one at the end of November or in December. We’ll hope to get the video out in between.” 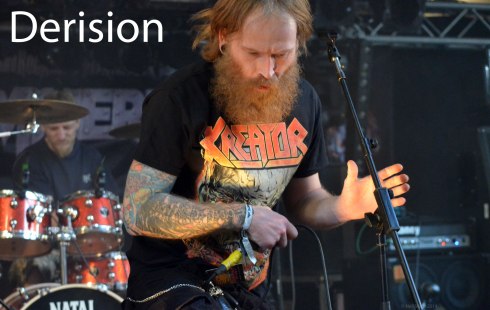 “Why not put together all the ideas into just one package and release it an album? “I ask.

“An EEEP?” I hazard to interrupt.

“Yes.” All the band laugh. “ An EEP. An EEEEEP even… Actually, why don’t we settle for the term: ‘mini album’. So then we can put more out. Give the people a bit more material.”

Kirsten chips in: “There will be an album number 2. And these two EP’s ( when taken together) can be classified as an album. As such. But the plan is to get a proper solid album of 12 tracks for the next year – later – hopefully in 2015. ”

I wonder why the band decided to release a video of such high quality – especially if funding and finding the ready cash was a problem.

“We wanted to make a statement. To stand out. We were aware that two years had passed since our first disc. Predation is the first thing that people have seen for a while. It means we can continue to work … We can get our things done.”

I ask the lads if they feel healthy – as a band – right now.

“Yes – we do. Everything looks more complete now. It feels good. And this is not to diss anyone… but … with Ian … er… let’s say that he locked in immediately. We knew he was right.”

“They never say anything nice about me normally” says Ian cheerfully: “This is all a revelation to me … ”

“Yes , we usually just give you a lot of er … Derision…” Everyone laughs at this.

I ask the band if Ian would be allowed to make a written contribution in the future.

“Yes, he is doing some live vocals for us. This is the first thing. We decided (the other week) to add some backing vocals .. . well ‘background grunting’ to be more accurate…”

” I’m not really a writer, however” Adds Ian “I write my own bass lines and stuff. But concept – wise and lyric- wise … I might be able to to throw the odd thing in … but I wouldn’t (I think) be able to come to the group with a fully-formed idea.”

“That’s good though. If Metallica had four James Hetfield’s … it just wouldn’t work. There’d be too much bullshit. “

I wonder what else is planned for the year.

“Well this ( Hammerfest ) is the first big thing. Hopefully things happen from this. Obviously we wanna do the live shows – but we know we’ve got to focus on the recording. And we’ve got to be selective. We are all busy outside the band. So we need to pick the ‘right’ venues when we go playing. Maybe we’ve got to be more clinical about it. We are balancing our personal life with music. And we’re not in our twenties anymore. We are a little more mature. A little older.”

And is that a benefit? I ask. “Is it better to be older and wiser?”

“Yes, we think so. We have learnt to do ‘tactical’ gigging. It has got to be better than playing the ‘Dog & Duck’ on a Wednesday night to somebody who doesn’t give a monkey’s.”

Before we parted company, I asked the band about their DIY work ethic.

” Yes, we all do it all ourselves you know. The whole lot.”

“In actual fact, Eddie’s got his own little thing going on.”

“And what is the next big thing on the horizon? “I ask .

The band all look guiltily at each other. ” Well , let’s just say that there is something juicy coming … We cannot say any more than that – right now. But fans are going to see some good things from us…in the near future.”

You cannot say fairer than that!