Yup! All the way from “YEEHAW COUNTY” Texas (it’s near Forth Worth) – Fritz & the Reverend Johnson aka WhiskeyDick return to UK shores this March to blow minds with a double-barrel blasting of dreadnaught-sized shredding and country bellowing that will make you want to knock back a shot as you pull on your overalls to jig with your sister. 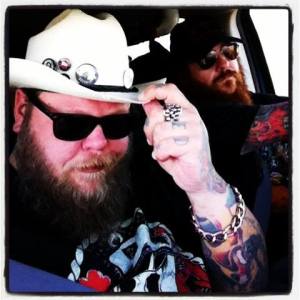 We have been listening to “Drunk As Hell” (single) –

With a ripe and utterly seductive acoustic riff – this starts out swaggering slow – like a gunslinger passing through sagebrush to meet his fate at high noon.

Fritz’s deep and plum-rich vocals almost bubble out like like molasses from the tub – quite extraordinarily rich and velvety.

Then the chorus comes … yes, it is about as traditional as you can imagine. But what the heck? This is as tasty as chitlins and mighty fine.

Required listening for all those who think that “Jax” is the least cool member of SAMCRO (because he’s far too well-groomed) and Zakk Wylde (of Black Label Society) needs to be more beardy.