Reading’s own heavy-duty doom-casters ELDERSEER a 4-piece deluxe, dark-smoke, horror-dream — kicked off round one of M2TM 2018 at the FACE BAR Reading this Friday. Very muddy and moody, their tangled compositions were pierced with bible-black openings, through which boiled incandescent guitars. For creations smoked with melancholy, this band couldn’t be bettered.

The clear favorites for many Face-bar customers were classic metal/thrashers DEADBLOW who dared to play a new song, “Heads or Tails” to judges and audience. Their penultimate number went wonky, and that gaff might have lost them points, though their careening “Don’t Say It’s Over” captured the mood of the night and had metal heads swaying-along heartily. Their guitarist certainly possessed pizzazz and fizz. A superb band.

Next up was the female fronted ESCAPE DECEMBER whose lead-singer, Samantha Bower, reminded us of Avril Lavigne, only ballsier. The Poole band has an über-impressive guitarist in their talented line-up: Ryan Crosswell. And their second song “Eyes Wide Shut” whipped up interest around the crowded Reading bar-room.

It’s good to have a bit of grunge these days … especially when it’s well done. And it’s not often performed as consummately as CIRCA NEVER who played an impassioned and impressive post-punk set without being affected by their defiantly anachronistic guitarist, who nonetheless played healthily and with guts. For lovers of Alice in Chains, this showcase was an incredible treat. 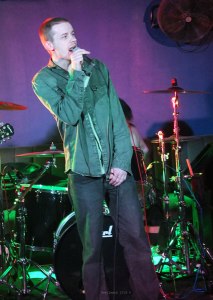 Electronic-rock maestros and buoyant performers REVENTURE — from Winchester — played the final showcase of the evening, with excitement and passion. The dub-steppish “Maverick” their next single, is a cloud-dancing extravaganza, for example.

“All I want to do is entertain you...” shouted vocalist Max Passell. And we believe him. We compared this band to Skindred, but with the pants on fire…

A fab evening. Reventure went through to the second phase.