WITHIN TEMPTATION — the metal overlords of darkest hymns — with a career spanning two decades — will release their seventh album titled “Resist” in most territories on February 1st.

“Resist” marks a variation from previous exploits: the album is equipped with ten uplifting anthems and is driven by expansive melodies that are loaded with penetrating hooks and “industrialized” and increasingly aphotic sounds. The result is an ultramodern and revolutionary version of their previous symphonic-metal output.

The mezzo-soprano singer Sharon den Adel says: “Resist is a true milestone for us. If it wasn’t for Resist, Within Temptation wouldn’t be here any more. With this record, we’ve taken inspiration from modern music and gave it a face – a very dark one. Sometimes it feels that today’s pop music lacks a rebellious edge.”

“Our main goal was to collect pieces from sounds we did like and roughen it up as much as we could, resulting in a surprisingly new musical world that is heavier, dirtier and more futuristic than we’ve ever created before.”

The first single extracted from the album, “The Reckoning” featuring Jacoby Shaddix [Papa Roach] has a ballooning step that sounds like a mastodon striding the scorched earth. This is less symphonic than previous sounds yet that holy voice still stands clear of the contamination and damnation that surrounds it… like a rising dove, it is dedicated and sanctified.

“Raise Your Banner” featuring Anders Fridén [In Flames] brings Sharon’s towering soprano into the darkest configuration yet devised by the Dutch metal act. A continuous and troubling beat increases anxiety before layer-upon-layer of texture is added. Reminiscent of “The Truth Beneath the Rose” [2007] the guitars are restricted on this, but are extremely energizing when they arrive, and the percussion is superior. In general, this song becomes a crest of salvation with a message: “Blood for freedom…” writ bold across the sky. 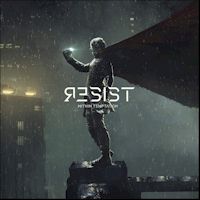 “In Vain” perhaps demonstrates, brilliantly, why the My Indigo singer is considered the holiest angel in the cloud-folds of symphonic metal… And the song reminds the audience that the band comes from a European melodic-pop culture — so expect this to be delicately embroidered and, yes, poppy… with a cross-over appeal that will see the single rise in the charts.

Long-term fans may not immediately approve of the band’s re-energized direction… especially the sense of manufacture found on “In Vain” — but this album is full of experienced technicality, great aesthetics and the “industrial” emblems offer a new cognitive experience. Yes, this album may be light in orchestral flourishing, but it’s brave and it’s glorious. Own and appreciate it as soon as you are able.

Resist by Within Temptation is available from February 1, 2019.

You have been sent this post because you have chosen to follow METAL AS RELIGION the music blog. You may UNFOLLOW at any time